With the legalization of cannabis on October 17th looming it is very important for everyone to understand the new cannabis use rules and regulations that come along with it. In this post we will take an in-depth look at the cannabis driving regulations. These are the rules and parameters put into effect with specifics as to levels of THC you are allowed to have in your system when driving.

The Criminal Code has always prohibited driving while impaired by drugs or alcohol but with the legalization of cannabis coming the act has been updated to include specifics regarding offences based on the blood level concentrations for cannabis. The Criminal Code still contains an impaired driving offence that does not require evidence of the levels of drugs or alcohol in the body, just proof of impairment. This goes along with the already in effect offence for driving with a BAC (blood alcohol concentration) above the stated legal limits, which requires proof of BAC level, but not proof of impairment.

There are three new criminal offences associated with the updated act which are based on having blood drug concentrations (BDC), within two hours of driving, that are at, or over, the regulated limits. The three types of charges are as follows: 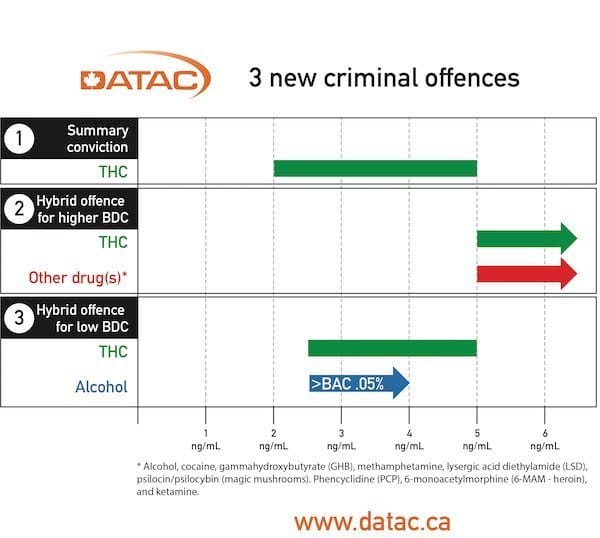 Oral Fluid Screening Device
The updated act also includes a new tool for police officers to test for impairment roadside with the approval of the Draeger 5000. This device is used to do a saliva drug-screen which can be implemented roadside and allows police to obtain a quick answer as to whether or not there is THC present in a driver’s system.

Standardized Field Sobriety Test (SFST)
This is a test done roadside if a police officer suspects that a driver is impaired by drugs or alcohol. This test is done using three psychophysical meters; Horizontal Gaze Nystagmus (HGN) test, the walk and turn test, and the one leg stand test. You do not have the right to refuse an SFST. If you refuse the SFST you could be charged with a failure to comply with a demand. If you fail the SFST the police are able to demand that you attend the police station for further testing.

Breath Testing
This is used to test for alcohol levels in the blood by having the driver in question blow into a breathalyzer. The breathalyzer will analyse the breath and compute the driver’s blood alcohol concentration (BAC). The allowable levels are set by out by Criminal Code with different consequences, from monetary fine and impounding of vehicle to criminal charge, based on the level found therein.

Drug Recognition Evaluation
This evaluation is more comprehensive then an SFST and must be done by an officer who has been trained as a Drug Recognition Expert (DRE). The DRE must have gone through special training to be designated as such, not every officer is a DRE. The DRE evaluations are generally done at the police station and are 12 steps which, on top of a breath test and the items in the SFST include such things as further eye tests, blood pressure, divided attention test, muscle tone and visual evaluations by the DRE.

Check out more from the RCMP